Here is the reverse side of the monthly return of the regiment for November, 1833: 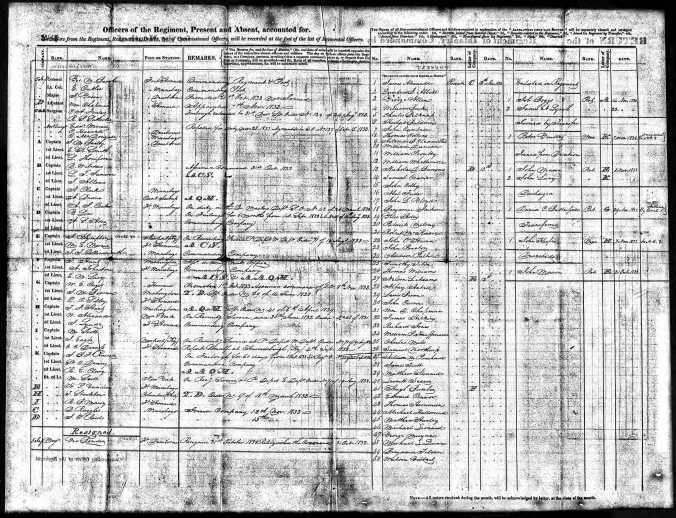 NARA, Washington, D.C.; Returns from Regular Army Infantry Regiments, June 1821 – December 1916; Microfilm Serial: M665; Roll: 54 Military Year : 1832-1842 (image 49 of 313). Return for Fort Howard, November 1833, verso. Accessed online at Ancestry.com. The front side of the November report is missing from the microfilm as posted on Ancestry.com and may be missing from the original microfilm. Click to open larger image in a new window.

What was JMC’s regiment and company doing in November 1833? Well, much to the chagrin of local boosters and politicians, they weren’t building the military road from Ft. Howard toward Ft. Winnebago. According to Richard D. Durbin and Elizabeth Durbin:

The first public mention of the project that ultimately became the Military Road occurred in January, 1829. Two residents of Green Bay—James D. Doty, Additional Judge of the Michigan Territory, and Henry B. Brevoort, Indian Agent—petitioned Major General Alexander Macomb, commander of the Army, for a road to link Green Bay with Calumet Village (Calumetville).

The idea of such a road was popular with many, including military leaders, politicians and business interests, as it would improve the security, increase the profitability and speed the immigration of new settlers into the area. As was (and is still) often the case, there was opposition from those—including then-President Andrew Jackson—who opposed on principle the expenditure of government funds for “internal improvements.” But on May 31, 1830, Congress appropriated $2000 to build a road from Fort Howard to Fort Winnebago. Surveying for the road began, but was interrupted over the next several years by lack of funds, a shortage of civilian and military surveyors, and by events such as the Black Hawk War of 1832. Over the next few years Congress made further appropriations for the survey, and authorized the extension of the survey and the road to Ft. Crawford (Prairie du Chien) on the Mississippi.

Lewis Cass had been governor of the Michigan Territory—which then included the future state of Wisconsin—from 1813-1831. On August 1, 1831, Cass resigned the governorship and began his tenure as Andrew Jackson’s secretary of war, a position he held until October 5, 1836. As both territorial governor and as secretary of war, Cass supported the Ft. Howard to Ft. Crawford military road. Cass had prodded Congress to provide additional funds as early as September, 1831, and again in 1832, and he hoped construction would begin in the Fall of 1833. But, as the editors of the Navarino (Green Bay) “Intelligencer” complained in their December 25, 1833 issue: 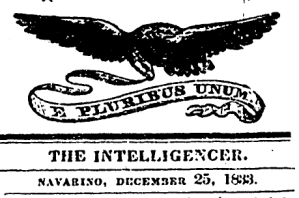 […] It is with pride that we advert to the fact of having such a work in our neighborhood—one which brings the Lakes and the Mississippi, to a direct intercourse. But our scope for congratulation is by no means enlarged when we look at the state of progress which this work is in; it is more than six [sic] years since monies were appropriated by congress time enough has passed to have it macadamized, or made a rail road, and what has been done ! It has been surveyed ! a work which has occupied the Commissioners one season, by which their duties are accomplished. […] Congress in its wisdom and liberality has given us a sum of money amply sufficient, (it being a military road,) to complete the work; yet nothing has, so far as we are informed, been done towards opening it.

In fact, the actual construction of the military road would not begin until April, 1835, some eighteen months after Pvt. Clark’s arrival at Ft. Howard. So what did the soldiers of the 5th regiment do that November?

The records at hand are not very helpful. It seems most officers were at their expected posts at Forts Howard, Dearborn and Winnebago, though many regimental officers were away on recruiting assignments and others had temporary duty in Washington, D.C or other posts. Per army regulations, Jonathan Clark’s Co. K should have been led by—at least—one Captain and a 1st and 2nd Lieutenant. In fact, Co. K suffered from a lack of experienced leadership, as did many companies of the U.S. Army of the 1830s. The company’s commander, Capt. Russell, was on a sixty-day furlough that began on October first, 2nd Lt. Clary was busy as Acting Assistant Quartermaster for Ft. Howard, and Brevet 2nd Lt. Scott was at the regimental recruiting depot, E[astern] Department (possibly Ft. Niagara), New York, assigned to recruiting service duty. The only officer left in Co. K was 1st Lt. Denny, commanding.

In addition to the usual officer shortages, there were many personnel changes that autumn. Four men left the 5th regiment in November. Maj. Geo[rge] Bender resigned from the army and relinquished his commission on October 31, and Pvt. David C. Butterfield was discharged on November 29. John Keefer, a musician from Co. H, transferred to another post on Nov. 7, and Pvt. John Mason deserted on October 31.

These losses were more than offset when, in November, 1833, fifty new privates from the general recruiting depot reported for duty on November 12 and 13; they were assigned to Cos. C and D, stationed at Fort Winnebago, and Co. E at Fort Howard. Two additional—probably local—men, Job Boggs and James A. Lynch, enlisted as privates in the regiment. Two privates rejoined their companies after returning from desertion, and probably time in detention: John Lary in Co. K, and John Mason in Co. E.

Musician Peter “Guillez” (probably a fifer named Peter Guillet), joined Co. K. by transfer. It appears he may have been assigned to assist Capt. Denny in leading Co. K. There is a small notation at the end of his “Joined by Transfer” information that appears to read: “7 Nov 1833” [the date of his transfer in], followed by “being actual/for a MC.S.” I have not been able to determine what “MC.S.” stands for, or whether “MC.S.” is the accurate transcription. According Article 2.2 of The General Regulations of the U.S. Army of 1821, a Musician was next lower in rank below a corporal. But according to Article 2.3:

It is possible that Musician Guillez held a musician’s sergeant-level rank and was, at least for the moment, a senior non-commissioned officer in Jonathan’s Co. K.

All in all, a total of 78 private soldiers, two corporals, and one musician of rank joined or re-joined the 5th regiment at Ft. Howard in October and November. They weren’t at war—the last Native American uprising had ended in 1832—and they weren’t building roads. So what occupied their days? Until we find more evidence, it is safe to say they probably did what new soldiers always do. They drilled and trained and cleaned. They cut firewood and burned charcoal. They prepared their post for a long winter on the frontier. And perhaps they sought amusement in nearby Green Bay…

For more on the origins and eventual construction of the military road from Ft. Howard to Forts Winnebago and Crawford, stay tuned for future posts here at Clark House Historian, and also read the long, interesting, and fully illustrated and documented article quoted above: Durbin, Richard D. and Elizabeth Durbin. “Wisconsin’s Old Military Road: Its Genesis and Construction.” Wisconsin Magazine of History, Vol. 68, No 1. (Autumn 1984), pp. 2-42.  It is available as a free download from the Wisconsin Historical Society at: http://content.wisconsinhistory.org/cdm/ref/collection/wmh/id/33542

If you are interested in Wisconsin history, don’t miss the free, searchable archive of all the past issues of the Wisconsin Magazine of History at: http://content.wisconsinhistory.org/cdm/search/collection/wmh/

I have not found musician “Guillez” in Ancestry.com’s “Register of Enlistments in the U.S. Army, 1798-1914; (National Archives Microfilm Publication M233, 81 rolls); Records of the Adjutant General’s Office, 1780’s-1917, Record Group 94; National Archives, Washington, D.C.” However, there are several listings for one or more men named Peter GUILLET, born in Quebec, Lower Canada, circa 1794. On June 23, 1829, one Peter Guillet, profession “printer,” enlisted for a five-year term of service at Rochester, New York, and was assigned to serve in Cos. G and K, 5th Infantry. He is described as dark eyed, sandy haired, light complexion and 5’7″ in height. In 1834, a man of the same name and description, but with the profession of “fifer” reenlisted in the army at Ft. Mackinac and was assigned to Co. G of the 2nd Infantry. My quick survey of the Register of Enlistments suggests this man appears to have first enlisted in 1819 and re-enlisted on four separate occasions. And, apparently, learned to play the fife while in the army. If anyone is interested in more details, please contact me.